The Japanese yen has resumed its terrifying downtrend, crushed under the boot of a central bank that refuses to follow other economies in raising interest rates. With inflation dynamics still subdued, traders are betting the Bank of Japan won’t lift a finger to stop the yen’s bleeding when it meets in two weeks and that the government won’t dare intervene in the FX market.

It has been an excruciating year for the Japanese currency, which has lost 25% of its value against the US dollar, tormented by one of the greatest episodes of monetary policy divergence in modern history. Central banks across the world are raising interest rates with incredible speed to fight sky-high inflation, but the Bank of Japan refuses to participate.

That’s because there isn’t much inflation to fight. Excluding food and energy, inflation in Japan is running at 1.2%, far from the danger zone. Most importantly, wage growth and inflation expectations remain suppressed, so it doesn’t seem like inflation is becoming entrenched. Ergo, the BoJ is convinced this is a global supply shock that will dissipate soon. 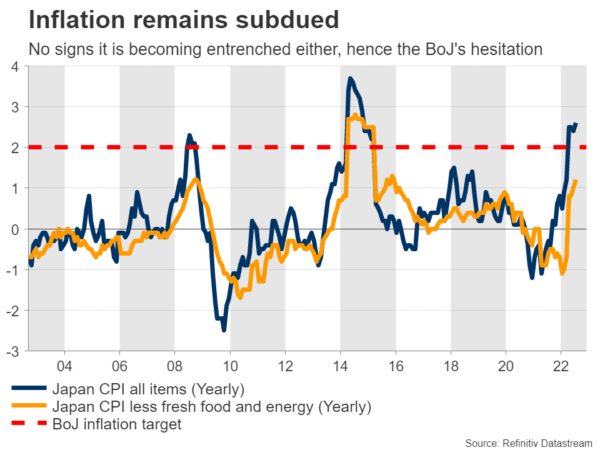 With interest rates moving higher everywhere except for Japan, rate differentials have widened, devastating the yen. Capital is flowing out of the country, searching for better returns abroad. This has turned the yen into a pure play for global rates, trading in lockstep with bets around what the Fed will do, instead of behaving like a safe-haven asset.

Another thorn in the yen’s side has been the shift in trade flows. The nation used to run a chronic trade surplus but with energy prices going ballistic and Japan importing most of its power from abroad, it has flipped into a trade deficit. Coupled with tourists being prohibited from visiting the island, demand for the yen has evaporated.

No FX intervention (yet)

Speculation is running rampant about intervention in the FX market to prevent further declines in the yen. Finance Minister Suzuki described the recent moves as “rapid” and “one-sided”, escalating his verbal warnings in an attempt to chase speculators away.

However, intervention remains unlikely. For starters, Japan would need to intervene alone because neither Europe nor the US would agree to weaken their own currencies and amplify inflationary pressures, simply to help Japan deal with a crisis partly of its own making. Solo intervention implies a lower probability of success, it requires a ton of FX reserves, and it could even backfire with a failed attempt giving traders the green light to enter new short bets. 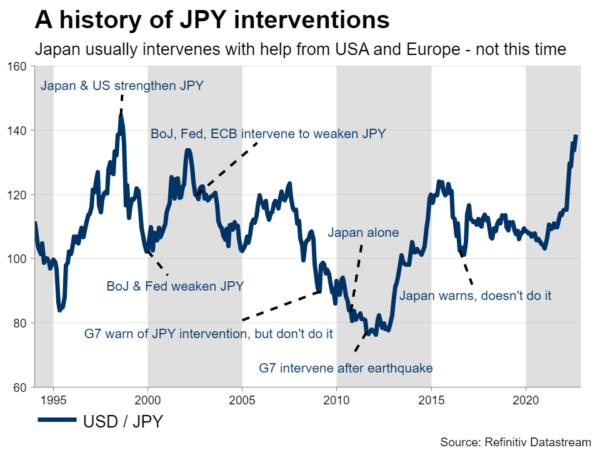 And despite the salvo of verbal warnings, the rhetoric doesn’t point to imminent action. Past instances of intervention were preceded by the finance minister describing the moves as “disorderly”, which hasn’t happened yet. After that, the next step would be an emergency meeting between the central bank and the Finance Ministry to discuss exchange rates.

In other words, we are still in the early stages of the intervention process and the officials are reluctant to truly threaten it, because they know it won’t succeed without global assistance. That said, there is a political limit to how much further the yen can fall. If the depreciation continues at such a frightening pace, Tokyo might still pull the trigger, even if only to flush out speculators.

BoJ sticks to its guns

A simpler way to stabilize the yen would be for the BoJ to tighten policy, for instance by raising the ceiling it has imposed on Japanese yields or abandoning it entirely. After all, this is the strategy that slaughtered the yen. By preventing domestic yields from rising beyond a certain point, the selling pressure on the yen intensifies the more foreign central banks raise rates.

Yet the BoJ doesn’t appear ready to pivot. Speaking last month, Governor Kuroda doubled down on his commitment to ultra-loose policy, saying there is no other choice until wages and prices are rising in a sustainable manner. Kuroda has also argued that a small increase in rates won’t be enough to turn the tide in the yen, pointing to other currencies that have been ravaged despite their central banks jumping into action. 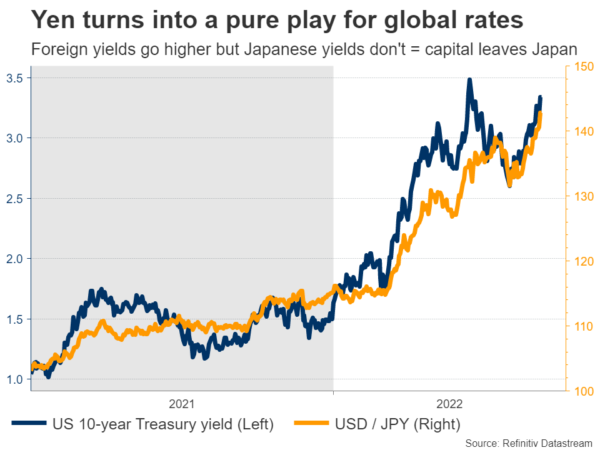 Currency traders seem to have absorbed the message and are trying to frontrun the BoJ decision in two weeks by selling the yen. This is also a meeting without updated inflation forecasts, so any dramatic policy shifts would be strange.

While market participants seem confident nothing will change this month, there is a growing sense the BoJ will ultimately be forced to capitulate. Bets that Japanese yields will breach the current ceiling have intensified again, with overnight index swaps rising sharply. Implied volatility has also spiked, which suggests some big players are hedging against massive yen moves.

Is the bottom close?

All told, it’s difficult to call for any trend reversal while the interest rate chasm between the Fed and the BoJ grows wider. There’s probably some more downside in store, with the dollar/yen chart pointing to a fierce battle around the 147 region, which was a reversal point back in 1998.

Of course, there are some elements that could resurrect the yen. If wage growth or inflation expectations begin to creep higher by October, that could spark speculation about the BoJ adjusting its yield ceiling higher. 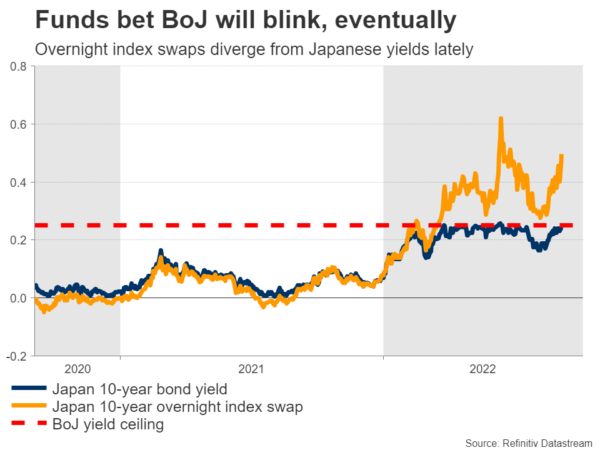 Alternatively, the paradigm shift could come from the dollar side of the equation. Should investors sense that the Fed’s tightening cycle is coming to an end or that the US economy is slipping into recession, that would allow rate differentials to compress again and breathe life back into the yen.

Until one of these occurs, the picture remains gloomy.