WTI oil futures have recoiled toward the vicinity of the mid-Bollinger band and the 50-day simple moving average (SMA) after upside pressures ran out of steam near the 114.00 price hurdle. The ascending longer-term 100- and 200-day SMAs are defending the broader positive structure, while the rolling over of the 50-day SMA, is reflecting modest dwindling in the price of the valuable commodity.

Elaborating on this we can see that the pullback in the price still has some ways to go to cause a dent in the bullish structure, having to sink past the support region containing the 100-day SMA in order to spark downside worries.

For now, the short-term oscillators are sponsoring the surge in negative momentum. The MACD, not too far north of the zero threshold, is waning toward its red trigger line, while the downward pointing RSI is testing the 50 level. Moreover, the stochastic oscillator is promoting additional declines in the black liquid’s price.

Solid NFP – Not Too Hot & Not Too Cold

In the negative scenario, immediate support may transpire from the mid-Bollinger band at 104.70 and the 50-day SMA at 103.35. However, if the retracement in the price of oil from the proximity of the upper Bollinger band at 112.00 matures further, the 100.00 border could come under attack prior to sellers challenging the reinforced 95.27-97.64 support boundary. Should this tough zone fail to dismiss negative tendencies from snowballing, the 90.05-92.66 base may then draw traders’ attention.

Alternatively, if buyers unearth positive traction somewhere around the mid-Bollinger band and the 50-day SMA, preliminary resistance could evolve at the 109.00 handle prior to the 112.00-114.08 section. Piloting higher and beyond the 116.62 key high, upside momentum could propel the price in the direction of the 125.00 mark and the March 9 high of 126.80.

Summarizing, WTI oil futures’ broader positive structure is ranging between 92.66 and 116.62. For positive prospects to grow the price would need to initially breach the 114.08, while a dive past the 95.27 trough could trigger more robust selling in the commodity. 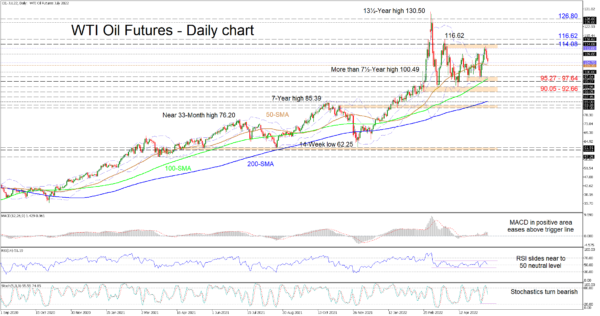 Why do investors like to add gold to their portfolios? LeapRate