Get Your Free Oil Forecast

Crude Oil continued its rally in European trade on the back of a weaker dollar, yet it is still on course for a second consecutive weekly loss. We have seen an increase in demand concerns, rising stockpiles as well as central banks tightening across the board. On Thursday, US government data indicated a buildup of crude inventories which increased by a larger-than-expected 8.8 million barrels. To compound matters, a gauge of gasoline demand sank below 2020 seasonal levels. Despite the current weakness in price, US officials are hunting for ways to keep oil in check with officials fearing a spike in prices later this year, there remains a possibility of an additional release from strategic crude reserves. 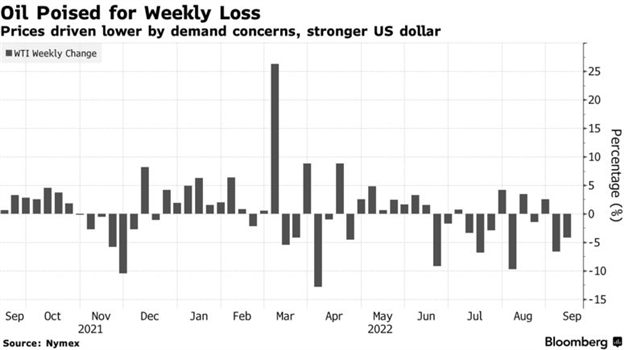 China has stepped up its covid defenses as a key communist party meeting looms, further restricting travel and adding to slowdown fears. This comes on the back of a slowdown in both import and export numbers from China earlier in the week. The outlook on Chinese growth this year had already been under pressure with the latest updates expected to trim growth forecast even further. These developments have seen worries mount regarding demand, with slowdowns forecast for Europe and the US in terms of growth.

On the flip side, crude’s slump this week presents a challenge for the Organization of Petroleum Exporting Countries (OPEC) who earlier in the week announced a cut of 100k barrels a day. The cut though did nothing to arrest the slide in price this week, as it was nothing more than a reversal of last month’s increase. While sentiment remains negative, further cuts could support prices moving forward as OPEC+ hinted at its intention to keep crude oil prices around the $100 mark.

On Thursday, Federal Reserve Chair Jerome Powell said that the US central bank was determined to curb price pressures, while the European Central Bank delivered a jumbo interest rate rise even as the region risks tipping into recession amid a worsening energy crisis. All attention today will switch to a meeting of energy ministers in Brussels, as they search for steps to alleviate the damage caused by the standoff with Moscow.

From a technical perspective, failure to defend the August low of around $85.73 has led to a further decline in prices, with a weekly low print of around $81.25. We have had an aggressive bounce higher since Thursday as we retested the descending trendline. We do however remain below the 100 and 200-SMA and considering the sharp decline of the last two weeks, we could see a pullback to retest MA’s. A continued rally to the upside may find resistance at the previous swing low around $86.21 with a break higher potentially finding resistance at the 61.8% fib level. A daily candle close above the most recent swing low at $85.73 will be key to see a continued move higher, which would also form a three-pin Morningstar candlestick formation which could lead to more upside heading into the new week.

Whether you are a new or experienced trader, we have several resources available to help you; indicators for tracking trader sentiment, quarterly trading forecasts, analytical and educational webinars held daily, trading guides to help you improve trading performance, and one specifically for those who are new to forex.

All your Fed previews in one place

Akoustis Founder and CEO Jeff Shealy to Discuss the CHIPS and Science Act 2022...

What Is Your Trading and Investing Style?