The U.S. dollar takes the top spot once again this week among the major currencies, once again supported by hawkish Fed speak and a strong U.S. employment update.

China hits Taiwan with trade curbs amid tensions over Pelosi

The Bank of England raised interest rates by 50 bps to bring the main borrowing rate to 1.75%

The monthly U.S. employment report came in much stronger than expected at +528K (vs. 250K forecast), & sparked sentiment that the Fed may have to tighten more aggressively 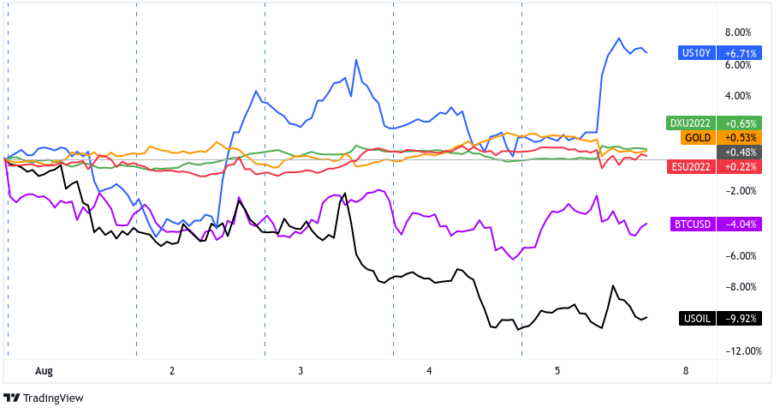 As mentioned in this week’s “Week Ahead in FX” post, this week was pretty stacked with top tier economic data and central bank events to potentially get the market’s moving.

But despite all of the potential catalysts, price action across most of the major markets was pretty choppy, with no directional moves that clearly stood out.

It’s likely that traders continue to be torn between many of the conflicting themes currently playing out, including an aggressive global monetary policy tightening outlook in what looks to be a slowing global economy (as shown by a fresh round of net negative PMI updates). It’s also likely that traders refrained from strong directional biases until the latest major data points and events played out.

We did see some short-term sentiment directional moves this week, most notably a shift towards risk aversion behavior on Monday on geopolitical and economic catalysts from Asia. This was mainly driven by China’s warnings to the U.S. on U.S. House of Representatives Speaker Nancy Pelosi visit to Taiwan on Tuesday. We also got a surprise read from Chinese PMI surveys showing contractionary conditions in China in July.

On Tuesday, it looks like the market’s focus shifted to comments from several Federal Reserve members re-iterating that rate hikes aren’t likely to slow down any time soon. Bond yields and the U.S. dollar strengthened on the session, while dollar denominated assets like gold and crypto took a dip. Also on the central bank front, the Reserve Bank of Australia and the Bank of England hike interest rates as expected, sparking short-term moves for their respective currencies.

Arguably, the big event of the week came on Friday, the latest U.S. employment update, which surprised bigly with over half a million net jobs gain in July (+250K forecast) and a tick lower in the unemployment rate to 3.5%.

This flies in the face of recession fears, and understandably sparked speculation that the Fed is able to maintain a hawkish stance on monetary policy tightening. As expected, risk assets took a hit after the event while bond yields popped higher to new intra-week highs.

This development was able to solidify the Greenback’s lock on this week’s top spot among the major currencies, while on the other end of the spectrum, the Japanese yen took last place once again, likely due to the Bank of Japan’s continued stance of keep their monetary policy loose. 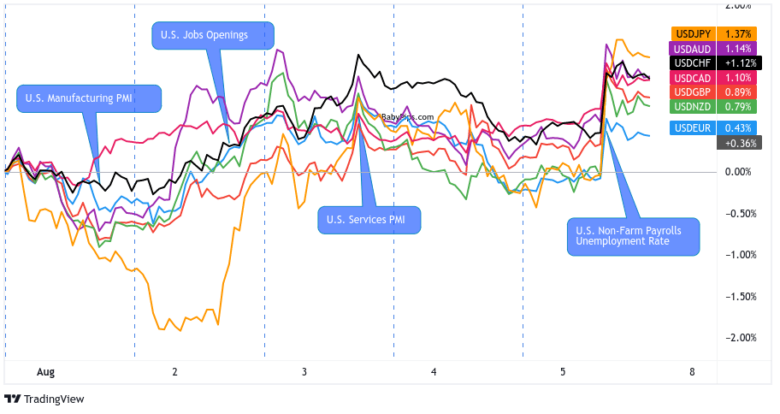 U.S. Non-Farm Payrolls showed an increased of 528K jobs in July, much higher that both forecast (+250K) and the previous month; the unemployment rate ticked lowered from 3.6% to 3.5% 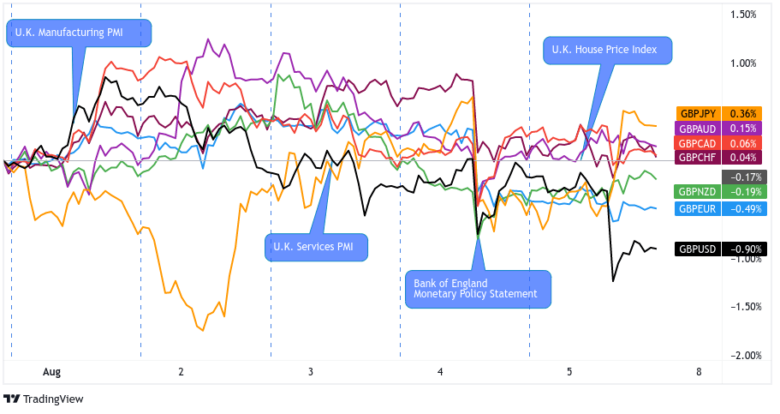 U.K. nationwide house prices index rose by 0.1% m/m in June, the slowest rate in the past year

The Bank of England hiked borrowing costs by 50 bps to 1.75%; expects inflation to peak in October but remain elevated through 2023

Halifax: average house price falls by 0.1% in July – first drop in a year 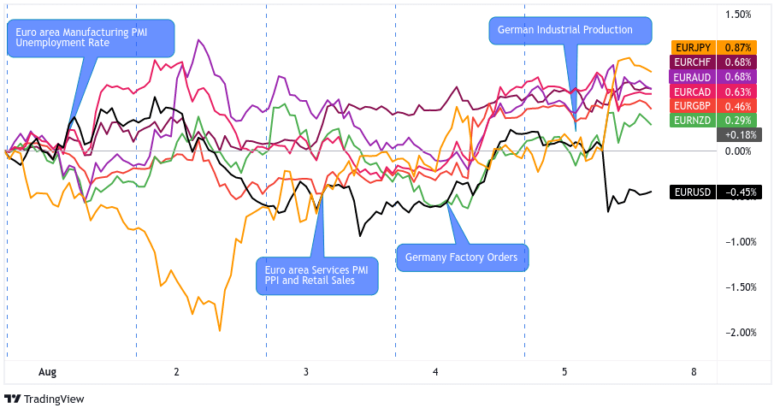 German exports surge by 4.5% to record level in June

Germany’s industrial output unexpectedly increased in June by +0.4% vs. a projected -0.3% rate 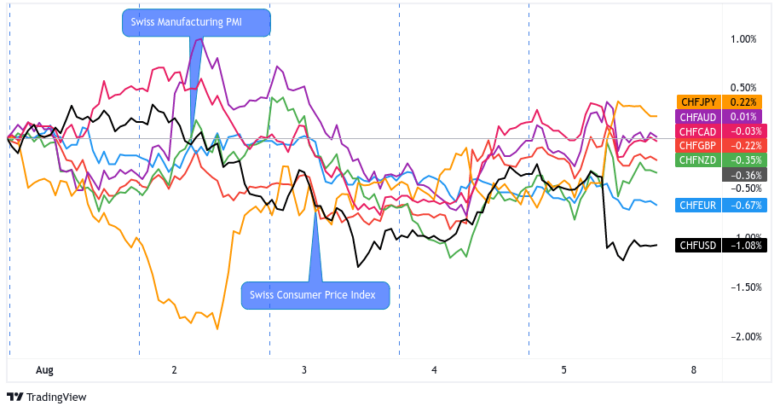 Swiss SECO consumer climate index tumbled from -27 to -42 vs. -31 estimate

Swiss Manufacturing PMI comes in better-than-expected at 58.00 vs. 56.3 forecast 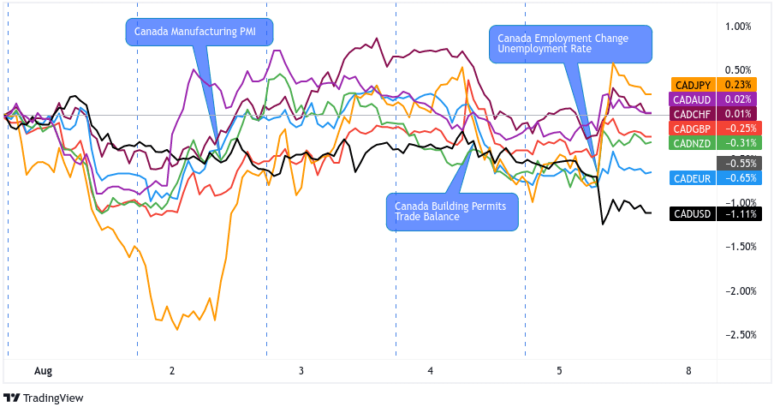 Canada Ivey PMI showed contractionary conditions in July, falling to 49.6 vs. 62.2 in June 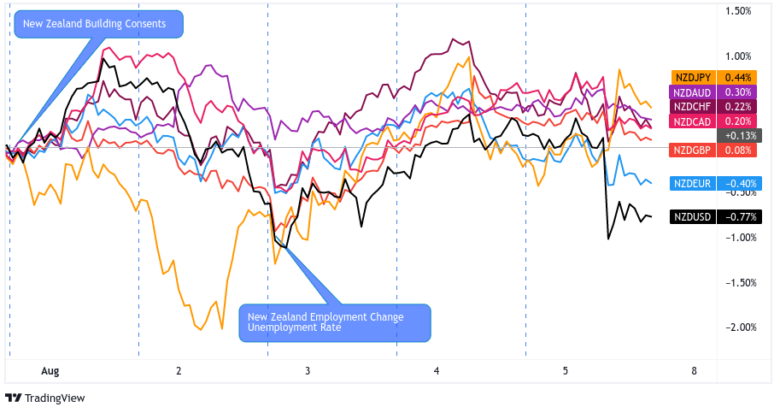 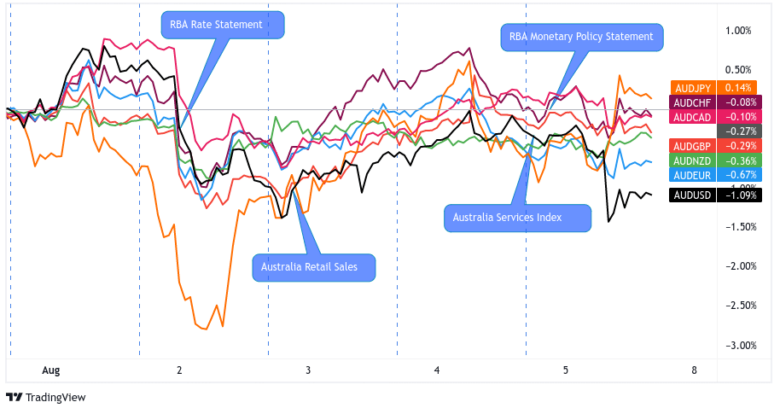 Melbourne Institute inflation gauge up by 1.2%, its fastest rate in two decades

Australian trade surplus widened to 17.67B AUD vs. 14B AUD forecast 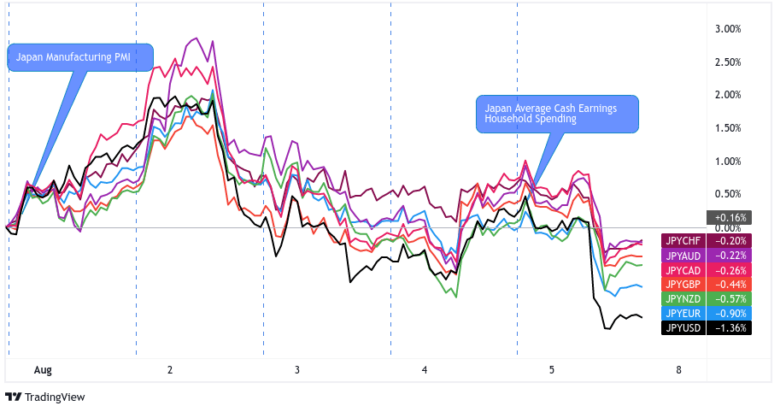 Japan Services PMI for July: 50.3 vs. 54.0 in June; the lowest in four month due to dampening demand

Japan annual cash earnings accelerates from 1.0% to 2.2% in June

Fed Powell: We need to act now, strongly as we have be doing