USD/JPY appears to be tracking the rise in US Treasury yields as it trades to a fresh yearly high (135.20), and the exchange rate may continue to appreciate as the Relative Strength Index (RSI) sits in overbought territory.

USD/JPY Rally to Persist as RSI Sits in Overbought Territory

USD/JPY clears the 2002 high (135.16) ahead of the Federal Reserve interest rate decision as the central bank is widely expected to implement higher interest rates, and the exchange rate may attempt to test the October 1998 high (136.89) as the Bank of Japan (BoJ) plans to “conduct an additional outright purchase of Japanese government bonds (JGBs)” on June 14.

The announcement suggests Governor Haruhiko Kuroda and Co. will have to further utilize their non-standard tools in 2022 as the central bank retains the Yield-Curve Control (YCC) program, and the diverging paths between the BoJ and the Fed may continue to push USD/JPY to multi-decade highs as Chairman Jerome Powell and Co. warn that “a restrictive stance of policy may well become appropriate depending on the evolving economic outlook.” 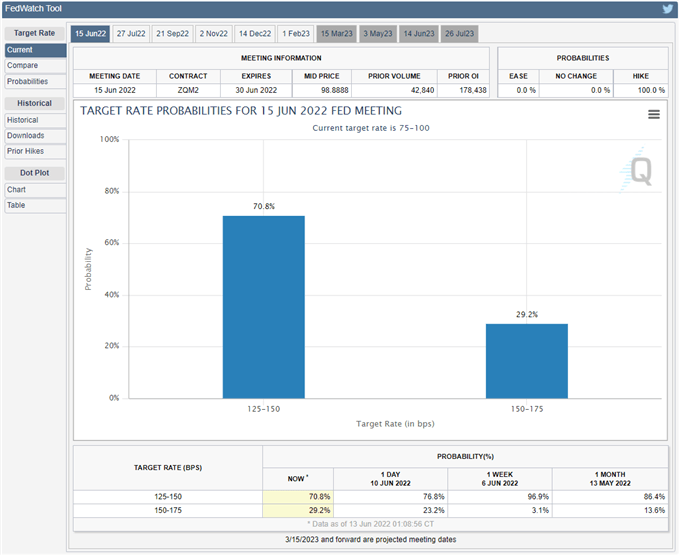 As a result, the Federal Open Market Committee (FOMC) looks poised to deliver at least another 50bp rate hike on June 15 as the CME FedWatch Tool reflects a greater than 20% chance for a 75bp hike, and it remains to be seen if the central bank will adjust the forward guidance for monetary policy as Chairman Powell and Co. are slated to update the Summary of Economic Projections (SEP).

Until then, a further rise in US yields may keep USD/JPY afloat as the BoJ remains reluctant to shift gears, and the tilt in retail sentiment looks poised to persist as traders have been net-short the pair for the majority of 2022. 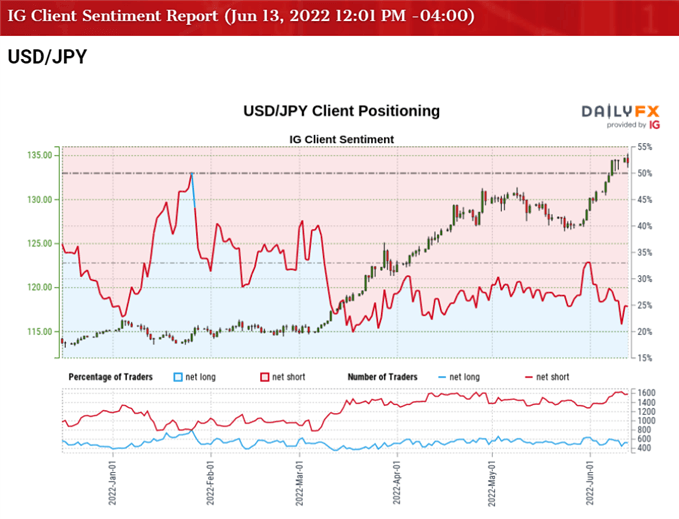 USDCHF Triple Zigzag To End Near 1.026

The IG Client Sentiment report shows only 24.37% of traders are currently net-long USD/JPY, with the ratio of traders short to long standing at 3.10 to 1.

The number of traders net-long is 5.66% lower than yesterday and 5.33% lower from last week, while the number of traders net-short is 5.08% higher than yesterday and 10.71% higher from last week. The decline in net-long position comes as USD/JPY clears the 2002 high (135.16), while the rise in net-short interest has fueled the crowding behavior as 31.51% of traders were net-long the pair at the start of the month.

With that said, USD/JPY may attempt to test the October 1998 high (136.89) as the FOMC is expected to further normalize monetary policy in June, but a move below 30 in the RSI is likely to be accompanied by a near-term pullback in the exchange rate like the price action seen earlier this year. 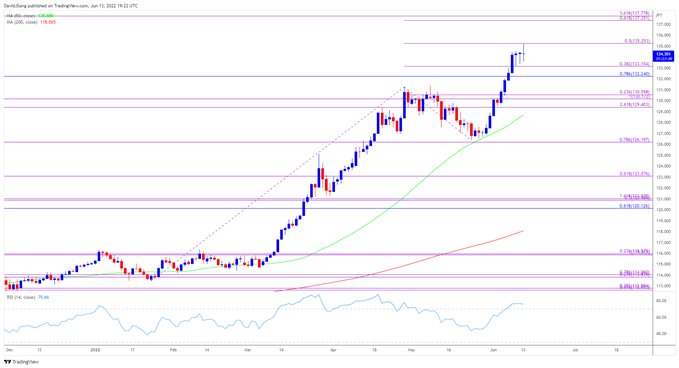 A Look at the Fed’s Interest Rate Decision, US Retail Sales

Will the ECB Keep a Lid on Inflation Expectations?