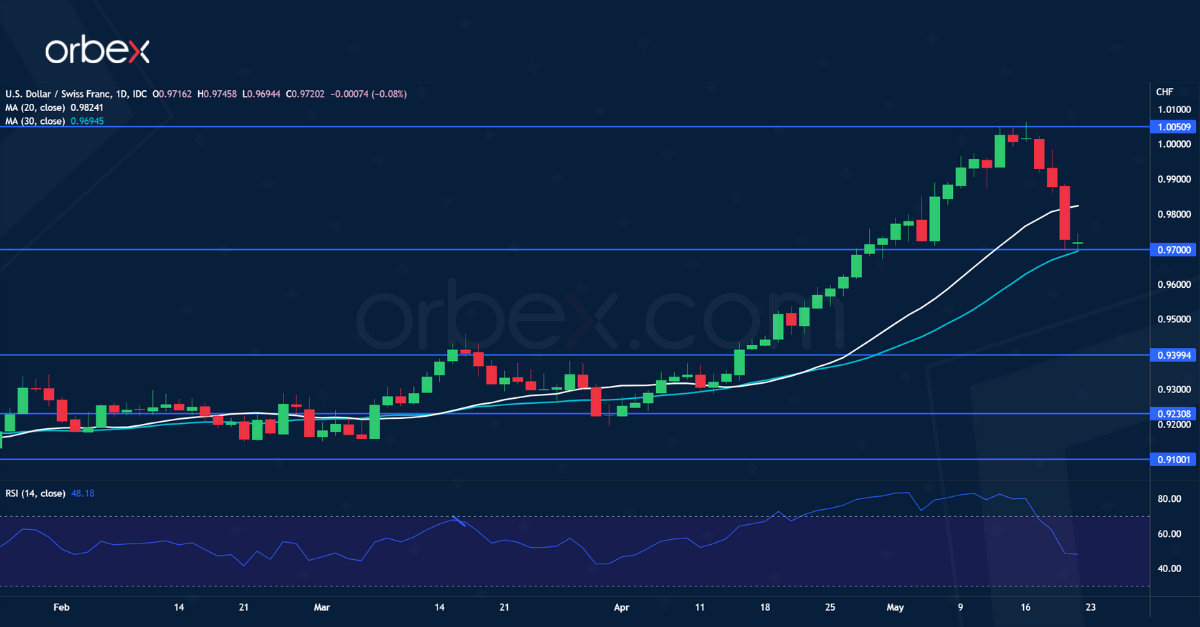 The Swiss franc surged after SNB Chairman Jordan hinted at possible monetary intervention. The SNB boss stressed that the central bank will pursue its independent policy regardless of the global tightening trend but would be ready to act if price stability is threatened.

Swiss inflation hit 2.5% in April, its highest level in 14 years and above the target of 2%, raising pressure on the most conservative central bank to drop its ultra-loose policy. A slight shift in expectations prompted swissie bears to abandon the parity and head for the exit. 0.9700 is the first support and 1.0050 a fresh resistance. 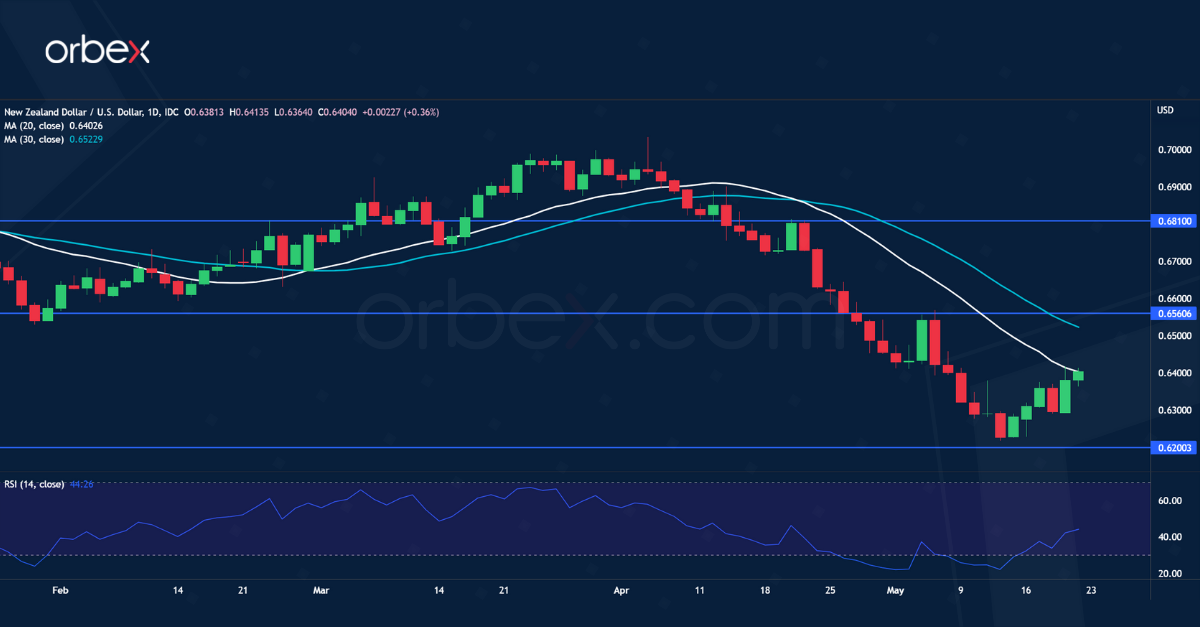 The New Zealand dollar recoups losses as the RBNZ is expected to increase interest rates by 50 basis points in the upcoming policy meeting.

Following a surprise half-point hike last month, an acceleration in inflation may prompt the central bank to stick to its aggressive stance. The market is betting on similar-sized tightening into the summer, which would bring the OCR above 3% later this year and offer a floor to the currency’s exchange rate.

Meanwhile, a timid return of risk appetite across markets could be supportive of the kiwi’s recovery. The pair is bouncing off a two-year low at 0.6200 to meet its first hurdle at 0.6560. 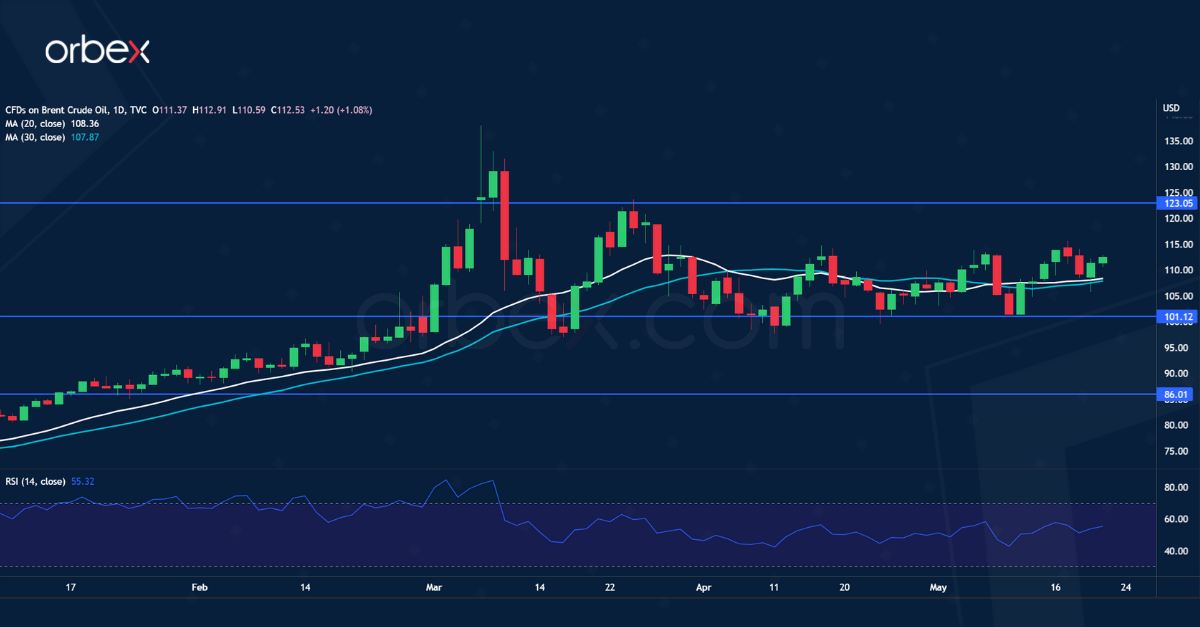 Brent crude consolidates recent gains as tight supply sees no sign of easing yet. The Biden administration may consider secondary sanctions on countries that buy Russian oil, a measure similar to the Iran Sanctions programme.

As the EU plans to phase out Russian oil by the end of the year, a broader embargo could only raise price pressures. Meanwhile, demand is expected to recover from China as Shanghai is set for a phased reopening after a two-month long lockdown. Oil prices would remain supported by the supply and demand imbalance. A break above 123.00 may resume the rally above 138.00. 101.00 is the closest support.

US 100 falls as growth at risk 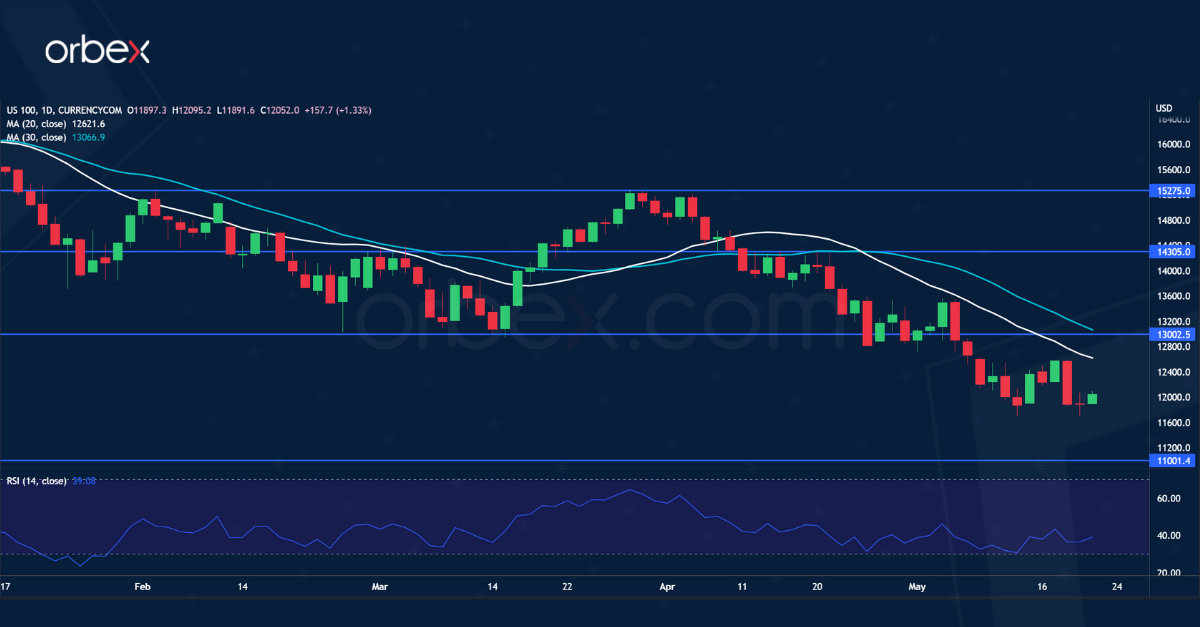 The Nasdaq 100 plunges as sentiment continues to sour amid growth concerns. Downbeat outlook and worsening margins in major retailers cast doubt on the critical economic engine that is consumption. Market participants are wondering when inflation will peak, and to that extent, when central banks will lift their feet off the pedal. Fed Chair Jerome Powell pledged to raise rates as high as needed to combat stubborn inflation, spooking investors who are unwilling to guess the bottom for fear of catching a falling knife. The index is heading towards October 2020’s lows at 11000. 13000 has turned into a resistance.

Test your strategy on how the US dollar index will fare with Orbex – Open your account now.