Global market volatility is back after the VIX Index, commonly known as the ‘fear gauge’, closed at its highest since the middle of July. It climbed 17.26% last week, which was the most since June. The tech-heavy Nasdaq 100 sank 4.26% in the worst performance since June. This is as S&P 500 and Dow Jones futures sank 3.5% and 3.12% respectively.

Things weren’t looking much better in Europe, where the DAX 40 and FTSE 100 weakened by 4.23% and 1.63% respectively. Looking at the Asia-Pacific region, Nikkei 225 futures took a 1.91% loss for the week. What drove this volatility? It mostly came down to the Federal Reserve.

Throughout June and July, traders were pricing in a pivot from the Federal Reserve next year. The annual Jackson Hole Economic Symposium, where Chair Jerome Powell spoke last week, continued to pour cold water on these expectations. Most of 2023 rate cut expectations have been priced out and quantitative tightening is underway.

As a result, the US Dollar gained this past week. Some of the worst-performing currencies were the New Zealand Dollar, British Pound and Euro. Meanwhile, anti-fiat gold prices weakened as the Greenback rallied alongside Treasury yields. Crude oil prices fared better, finishing higher last week. This might have been due to rising bets that OPEC+ might curb output amid falling prices.

All eyes next week turn to August’s US non-farm payrolls report. Signs that the labor market in the world’s largest economy remains tight may underpin Fed tightening bets, risking market volatility. Outside of the US, Chinese manufacturing PMI will give a better idea of how growth woes are shaping up in the world’s second-largest economy. Euro Area and German inflation prints are due. What else is in store for markets in the week ahead?

US DOLLAR PERFORMANCE VS. CURRENCIES AND GOLD 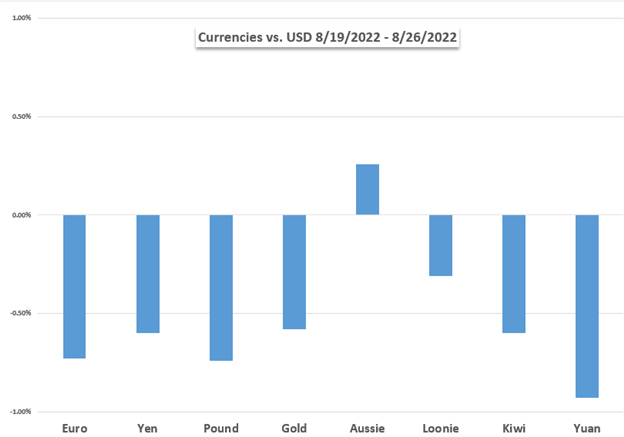 US Dollar Forecast: Will Another Non-Farm Payrolls Print Offer a Tight Labor Market?

The US Dollar is regaining upside moment against the backdrop of Fed hawkishness, quantitative tightening and market volatility. Another tight non-farm payroll report may offer the same.

EUR/USD goes into the week with markets knowing the Fed’s aggressive outlook while the EU continues to be plagued by an energy crisis as we head into winter.

UK consumers and businesses are facing escalating energy bills in the coming months, leaving the UK economy and the British Pound facing an unstable future.

Australian Dollar Outlook: RBA in the Shadow of the Fed for Now

The Australian Dollar had a whippy week after Chinese stimulus plans were over wrought by a Federal Reserve that got tough talking around a campfire in a ski resort.

Bitcoin, Ethereum and alt coins ruined by Fed Chair Jerome Powell’s speech that sent cryptocurrency and risk assets into a sea of red. Next up is ISM and NFP, two big data points for risk aversion.

It was a wild week in the US Dollar but bulls continue to brew as Powell takes another hawkish step. The bigger question is whether EURUSD will plunge far below parity.

Stocks got hit hard on Friday on the back of a hawkish Powell at Jackson Hole; the overall outlook has been negative this just adds to it.

WTI struggled to hold on to early gains this week as technical hurdles came into play. The 95.00 level provides a host of confluences that threaten to derail any further upside in the week ahead.

Gold’s recent advance was capped at the 50 SMA while silver approaches a significant zone of support, where a possible break below, highlights levels last seen in 2020

USD/JPY may continue to exhibit a bullish trend as the exchange rate appears to be tracking the positive slope in the 50-Day SMA (135.74).

Euro and British Pound plunged Friday. What about dollar?