It has been a noticeably quiet day on the currency markets, and the Japanese yen is almost unchanged on the day, trading at 127.31.

Japan’s services producer price index in April climbed 1.7% YoY, up from 1.3% in March and above the estimate of 1.5%. This was the fastest pace since February 2022 and is a sign that inflationary pressures are accelerating broadly across the economy. Japanese companies are often unwilling to pass on higher costs to customers, but rising inflation appears to be forcing companies to share the pain. We’ll get another look at inflation on Friday, with the release of Tokyo CPI for May. The index is expected to inch up to 2.0% YoY, up from 1.9% prior.

The BoJ has lagged behind other major central banks, which have embarked on rate-tightening cycles. The BoJ has continued its ultra-accommodative policy, which it insists is needed to boost the fragile economy. BoJ Governor Kuroda has defended keeping interest rates low, saying that wages and service price inflation have remained modest. The BoJ continues to treat cost-push inflation as transient. Other central banks have had to walk back from the ‘T-word” when it came to inflation, but Japan’s inflation is of course much lower than what we are seeing elsewhere.

The US economy contracted in the first quarter, as second-estimate GDP came in at -1.5%, shy of the estimate of -1.3% and below the first estimate of -1.4%. On the positive side, personal consumption increased, which bodes well for consumer spending. The slight downward revision is unlikely to concern investors and I don’t anticipate the US dollar losing ground as a result.

The FOMC minutes signalled that the Fed will deliver 50-bps hikes in June and July and take a pause in September. This helped to calm nervous markets, as a massive 75-bps hike, which some Fed members have called for, appears off the table. Investors have become increasingly concerned that the US economy might tip into recession. Recent data, such as housing, has been weak, while at the same time that the Federal Reserve has embarked on an aggressive rate-hike cycle aimed at slowing the economy and containing inflation. 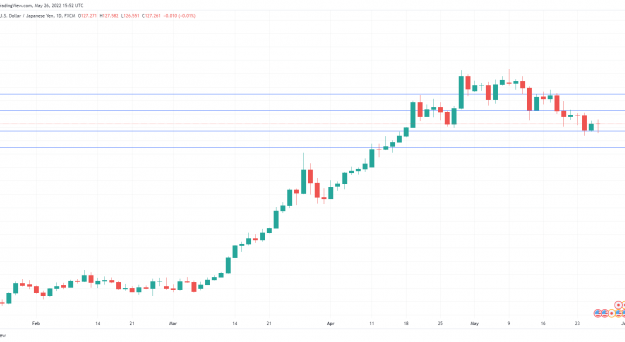 This article is for general information purposes only. It is not investment advice or a solution to buy or sell securities. Opinions are the authors; not necessarily that of OANDA Corporation or any of its affiliates, subsidiaries, officers or directors. Leveraged trading is high risk and not suitable for all. You could lose all of your deposited funds.

A highly experienced financial market analyst with a focus on fundamental analysis, Kenneth Fisher’s daily commentary covers a broad range of markets including forex, equities and commodities. His work has been published in several major online financial publications including Investing.com, Seeking Alpha and FXStreet. Based in Israel, Kenny has been a MarketPulse contributor since 2012.

New 10 Cryptocurrencies Other Than Bitcoin

How Forex Brokers Can Tap the Metaverse Ahead of Competitors