Gold prices fell around 1% last week despite a late-week surge on Friday following the US non-farm payrolls report (NFP). The US economy added 315,000 jobs in August, beating the +298k Bloomberg consensus forecast. A speech from Federal Reserve Chairman Jerome Powell last Friday expelled the market’s pivot narrative, with Mr Powell stating that the US central bank will continue raising rates.

That sent gold-sensitive breakeven rates—the difference between the nominal and inflation-indexed Treasury yields—lower throughout the week. The 1-year US breakeven rate fell below 2% for the first time since 2020 but started climbing after the US jobs report crossed the wires. That increase helped to lift bullion prices.

Rate traders bought Treasuries after the jobs report revealed some weakness in wage data relative to expectations. That cooled Fed rate hike bets, although traders are still leaning towards a 75-basis point hike at the September FOMC meeting. Average hourly earnings rose 5.2% on a year-over-year basis, missing the expected 5.3% y/y number. That signalled some softening in the still-tight labour market, an encouraging sign for Fed policymakers.

Friday’s NFP report was the last before the September 21 FOMC meeting. The upcoming trading week offers some potentially gold-moving economic prints, with the ISM services sector PMI due to cross the wires on Tuesday. Analysts see the gauge declining to 54.9 from 56.7. The July trade balance, jobless claims and wholesale inventories data will round the week out.

Chair Powell is scheduled to speak on September 8 at the Cato Institute’s annual conference. Vice Chair Lael Brainard’s commentary on September 7 is also likely to grab the market’s attention. Gold’s direction may hinge on the Fed speak. If Mr Powell or Ms Brainard give rate traders reason to pull back their bets further, it would likely allow XAU to move higher. Meanwhile, a hawkish rebound in FOMC bets is unlikely to materialize following the jobs data. That said, gold prices may move higher this week. 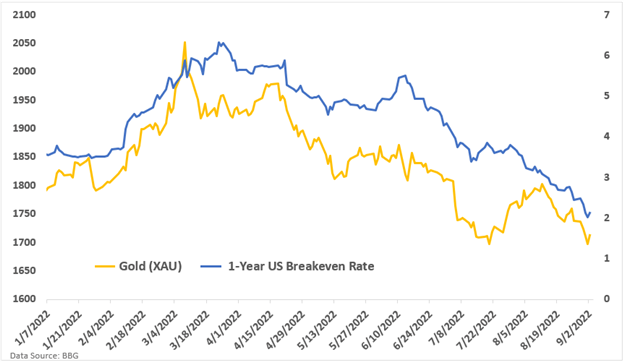 How to Setup RSI Alerts on TradingView

How to Find the Best Latin America Market Payments Provider

What is crypto apex, and why is it so addictive?