Canada’s June inflation report will be front and center next week after U.S. inflation reached its highest level in four decades (at 9.1%). We anticipate Canada’s inflation rate will edge up to 8.0% from a year ago. That would be the highest since 1982. This continued acceleration was likely largely driven by higher food and energy prices – both of which have been boosted by global pressures. Oil prices rose another 4.8% from May and consumer food prices have been surging in part due to higher commodity prices and acute supply chain disruptions. Roughly half of inflation recently has been driven by forces beyond our borders by our count.

Some of those global price pressures have shown clear signs of easing, and we are cautiously optimistic that price growth will slow in the near-term. Global shipping costs (and times) have declined and wheat prices have reversed their surge on the initial Russian invasion of Ukraine. Oil prices have fallen 20% from early June, pushing gasoline prices lower into July. The largest domestic driver of inflation to-date has been higher house prices – and those have also shifted into reverse as early interest rate hikes cool housing markets.

Still, businesses are grappling with acute labour shortages and surging wage growth. Consumer demand is still very strong and the persistence of very high price growth has been pushing longer-run inflation expectations higher. Against that backdrop, inflation pressures are unlikely to ease sustainably to the BoC’s 1% to 3% target range until the economy, and labour markets, have cooled substantially. This week, the Bank of Canada “forcefully” hiked rates by a full percentage point to 2.5% (the mid-point of what the central bank sees as a ‘neutral’ 2% to 3% range), and flagged more hikes to come.

AUDUSD Cycle Correction b To End Near 0.645 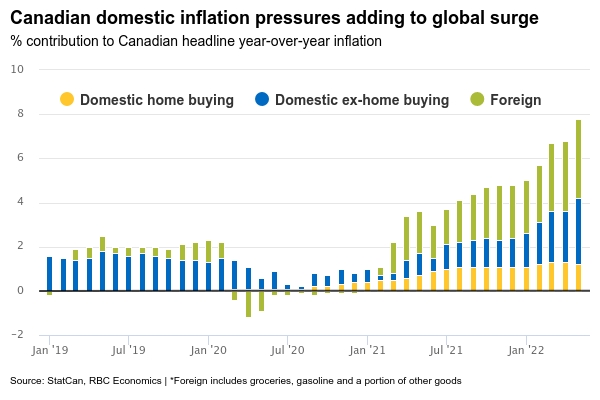 Statistics Canada’s advance estimate of Canadian may retail sales was up 1.6% from May. Our own tracking of card transactions is pointing to still high levels of consumer demand in June, supported also by recovering travel and hospitality spending, although spending has shown signs of plateauing at high levels.

Canadian housing starts are expected to fall slightly in June to 280,000 units- a level that is still extremely strong and consistent with the 276,000 permits issued the prior month in May. Lingering effects of strikes in the construction industry may impact June data, but will not drag on since negotiations have since been settled. 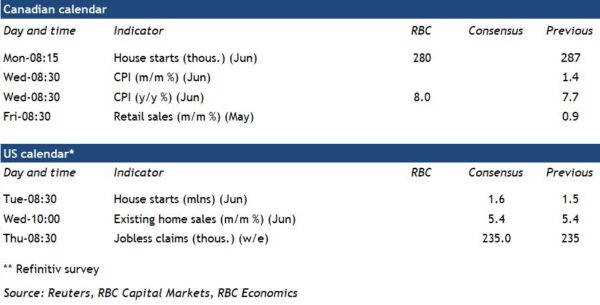 TRADING ACCORDING TO THE SIGNALS OF THE AUTHOR’S INDICATOR ON THE EURAUD CURRENCY PAIR....

Currency Pair of the Week: EUR/USD