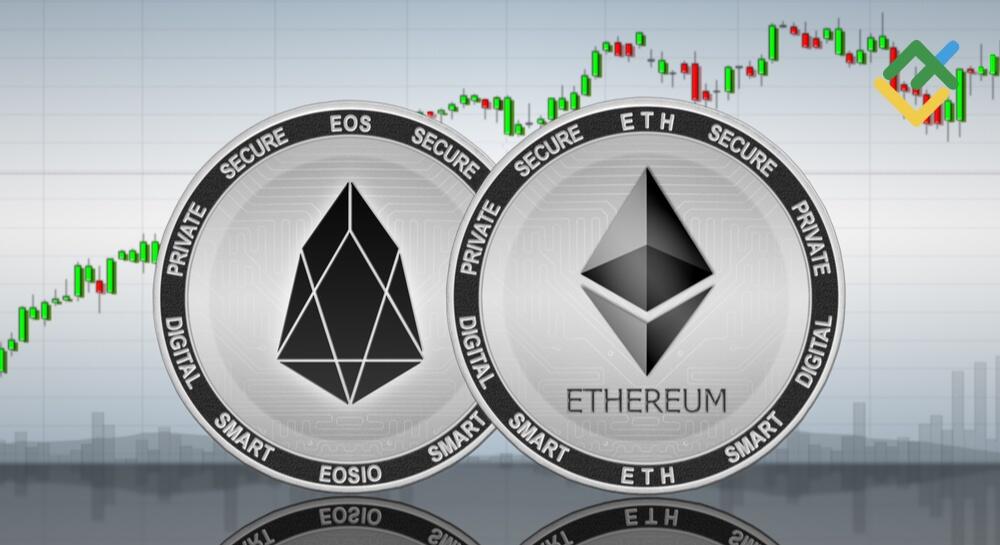 Cryptocurrency is a buzzword in the tech realm. The first cryptocurrency was Bitcoin, followed by Ethereum, which came to be known as the second generation of blockchain technology after Bitcoin. There are new cryptocurrencies entering the blockchain world, with EOS being one such cryptocurrency actively challenging Ethereum’s capabilities.

There are two extra benefits that Ethereum offers over Bitcoin, such as the ability to run decentralized applications (dApps) and power the next generation of the decentralized internet. Ethereum is one of two blockchain “supercomputers” which can process smart contracts and has been in existence for a shorter period than EOS, yet it currently has greater interest from skilled developers.

Here, we’ll go over the key differences between the EOS blockchain and Ethereum, as well as which crypto token you should invest in.

The article covers the following subjects:

The most popular smart contract platform is Ethereum, which is also the backbone of most DeFi apps. Many coins on the market are built using Ethereum as ERC-20 tokens, and this shows just how important blockchain technology is to the overall crypto market.

The reason Ethereum killers such as EOS exist is due to natural competition, and because Ethereum does have weaknesses that make it difficult to scale. Current solutions for ETH network congestion include stablecoin and DeFi apps moving to other blockchain protocols, or Ethereum developers scrambling to address issues in the near future.

EOS is a crypto token that can be used for transactions. It’s an alternative to ETH and has many benefits. The EOS platform provides a series of services that allows you to create and execute smart contracts. It is much more efficient than Ethereum’s design, as it uses replicated parts of a computer system.

What Is EOS Trying to Achieve?

Daniel Larimer, the CTO behind EOS, is convinced that Ethereum can’t deliver the performance people want. He argues that regular people don’t care about decentralization as much, but care more about performance.

EOS is trying to limit the requirements people need in order to create dApps. EOS wants to make it easier for people to create dApps, which is why their chief rival is ETH.

EOS requires less coding than Ethereum, is easier to learn how to use and navigate, and provides more base features. These are crucial because most people do not have the technical knowledge required to create an Ethereum smart contract. Larimer claims that one day, EOS will handle millions of transactions per second (TPS). Today they are focusing on 1,000 to 8,000 TPS.

How Does EOS Work?

Developers can buy computer resources for the blockchain, earning tokens for using it. This computer power can be used in the DeFi economy to create more projects. EOS differs from Ethereum in that it has support from the creator of its software, Block.One, and Dan Larimer, the creator of EOS software. Meanwhile, while Ethereum’s developer community is taken more seriously than EOS, there isn’t any one person as strong behind ETH.

What Is the Difference Between Ethereum and EOS?

There are many differences between EOS and Ethereum, but there are also some similarities. In the following sections, we’re going to break down what they are, as well as their strengths and weaknesses.

Ethereum is a crypto-based platform which was created by Vitalik Buterin. The original ETH blockchain now exists as Ethereum Classic (ETC), and most of the development community’s efforts go into maintaining the current blockchain, called Ethereum.

In the DAO, a decentralized organization, Ethereum’s Serenity will be rolling out soon. This will help increase scalability for ETH 2.0, which is coming soon. EOS is an Ethereum-based cryptocurrency that later floated to its own protocol after launching on the blockchain. EOS was created by Block.One with Dan Larimer as co-founder.

EOS tokens were one of the most successful ICOs, raising billions in capital through crowdfunding. Several newer coins are trying to compete with Ethereum for market share, but it is EOS that stands the most chance of succeeding.

Ethereum’s transactions are becoming more and more popular, with new dApps growing at a rapid pace. Still, Ethereum transactions have been facing controversy as fees skyrocket. You need ETH to make transactions on DeFi projects and trading.

The EOS network currently has a limited number of dApps, which means that it can handle high speeds with low costs. While this can be a good thing for EOS, as the space is in less demand right now, it also means that in order to take advantage of its full potential, changes need to happen soon.

Ethereum works on a hybrid Proof-of-Work/Proof-of-Stake system, with the intention of eventually relying solely on Proof-of-Stake consensus. Ethereum imposes restrictions on developers to prevent any changes or disagreements, delegating major decisions to forks.

EOS will use a consensus model that helps avoid the need to depend on mining or staking. They also plan on using a constitution, which allows users to be subject to a single set of rules and regulations.

The Ethereum supply is currently being debated by people in the crypto world. Some people say there isn’t a limit on how much Ether can be mined, but Bitcoin caps their supply at 21 million coins. Currently, there are over 110 million ETH in circulation, which might cause debate about the supply of ETH. Ethereum has a larger market capitalization due to lower total supply and higher prices per coin.

EOS is a cryptocurrency with a supply of 1 billion tokens. 60% of these tokens are distributed to investors, 20% are held in reserve for the EOS development team, and 10% are set aside for block producers. Block producers play an important role in the EOS ecosystem by verifying transactions and maintaining the blockchain. They are rewarded with EOS tokens for their work.

Use Cases and Target Market

There are many aspects of both Ethereum that makes it an excellent choice for building decentralized applications. Ethereum, however, has more activity in this arena over EOS currently.

As you can see in the chart below, Ethereum has outperformed EOS significantly throughout its short history. There is little historic price action, so take the visual information with a grain of salt.

Ethereum has surpassed its all-time high, and its price is now much higher. It seems to be less volatile than EOS, because EOS only recently broke out of its downtrend.

Ethereum had a downtrend breakout a lot earlier, resulting in a huge and steady uptrend. EOS may have the same rise next, so it could potentially be more profitable in the short-term.

Ethereum 2.0 – Solving Scalability and Other Issues?

Ethereum 2.0 is an upgrade of Ethereum, also known as Eth2 or Serenity. The upgrade intends to improve the ETH network’s speed, scalability, and efficiency so that the blockchain can handle more transactions than before.

But the Ethereum Foundation says that Ethereum 2.0 is just a network upgrade, instead of an entirely new system. Now, Ethereum 1.0 has been renamed the “execution layer,” which contains smart contracts and regulations. Meanwhile, Eth2 has become the “consensus layer,” which guarantees that devices on the network act in line with those policy sets. The name Ethereum 2.0 still refers to this upgrade.

The full release of Ethereum 2.0 is not estimated to happen until at least 2023, following the first phase’s launch in 2020. Known as the Beacon Chain, this is critical for Ethereum’s transition to a Proof-of-Stake consensus process. The second phase, known as the “merge,” will bring together the Beacon Chain with the Ethereum main net during the 3Q-4Q of 2022.

Shard chains will help grow the Ethereum network. Instead of resolving all transactions on a single blockchain, shard networks distribute them among 64 different chains.

This means that an Ethereum node will start to require less hardware because less data will need to be kept on a system.

The ETH price and the EOS price are important factors to take into consideration when making an investment. People expect Ethereum to reach tens of thousands in the future. The short-term predictions are that Ethereum will be near $3,500 per token.

The EOS blockchain has less mainstream buzz than the Ethereum network, so its price predictions are few and far between. However, experts predict the coins to reach as much as a thousand times their current value.

Is EOS Better Than Ethereum?

Several people compare EOS to Ethereum, as they both aim to decentralize organizations and currencies and create a more transparent financial world. There is an argument that EOS is superior, but it may not be possible to make a clear comparison between the two projects.

Some people believe that EOS, which is much younger than Ethereum, can help it get around some of its problems.

ETH is still a work in progress. When it goes through sharing and Plasma, Ethereum may be able to reach tens of thousands of TPS. Vitalik Buterin believes that the current version of Ethereum is too slow — he thinks Ethereum will get much faster after these two updates.

However, at their core they have different models: with Ethereum developers must pay gas fees, but with EOS, users of smart contracts must pay the gas fee.

Ethereum is working on scaling, but may have issues with backward compatibility. EOS may not have such troubles. So, ETH is more difficult to adopt because it requires a programming language, Solidity. EOS doesn’t require the use of a third-party programming language, so its widespread acceptance may lead to its adoption over Ethereum.

EOS has the ability to speed up changes, where Ethereum systems do not. In EOS, a smart contract can be updated, but there is a risk of messing up the system.

Blockchains are evolving. They will have more competition, including from EOS and Ethereum.

Ethereum and EOS are the most popular blockchain platforms. The EOS coin is said to be a more powerful alternative to Ethereum. It is second in size only to Ethereum and has been dubbed ”the Ethereum killer”. But since Ethereum is so large, it will be difficult for the EOS coin to replace ETH.

As a result, EOS has the potential to outperform Ethereum in the short run. This may make it more profitable for investments, but there is no way to predict which will be better over time.

If Ethereum doesn’t lower the prices for transactions, it will be difficult for it to continue to exist with high standards of performance. If EOS can think of a way to keep up with Ethereum’s success, then EOS might overtake Ethereum as the ultimate decentralized application platform.

The competition is nowhere near over between EOS and ETH.

While both platforms have their own strengths and weaknesses, it’s hard to deny that EOS has made some serious progress in recent months.

EOS is a smart contract platform that enables developers to build decentralized applications (dApps) on its blockchain. One of the key features of EOS is its scalability: it can handle many transactions per second, which makes it suitable for large-scale applications.

These advantages are the basis for a great future for the coin.

Bitcoin: The Trojan Horses Have Bolted

Market Jumps on Another Fed Hike!