Risk-off flows seem to be picking up again!

Can NZD/JPY sustain this double top pattern breakdown before the trading week ends?

Before moving on, ICYMI, yesterday’s watchlist checked out AUD/USD’s descending triangle pattern ahead of the U.S. core PCE price index release. Be sure to check out if it’s still a valid play!

U.S. personal income up by another 0.5% as expected

New Zealand consumer confidence index down from 82.3 to 80.5 in June

Japan’s Tankan manufacturing index fell from 14 to 9 vs. consensus at 13

What to Watch: NZD/JPY 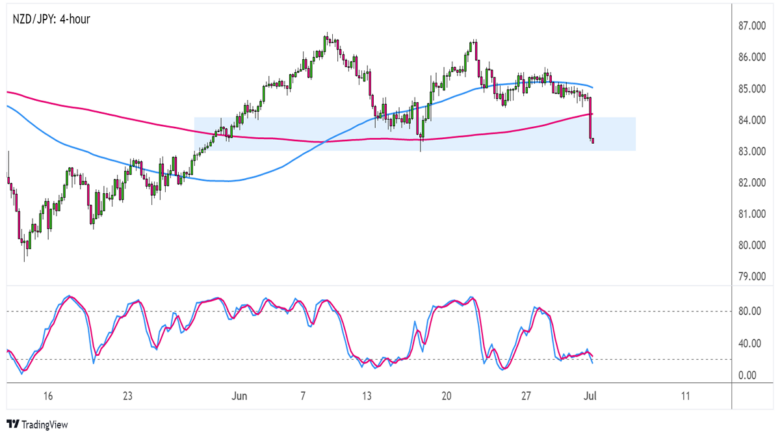 Don’t look now, but NZD/JPY is perched right on top of its double top neckline!

Can it swoop below support and go for a reversal from here?

Technical indicators are still pointing to the presence of bullish vibes, as the 100 SMA is above the 200 SMA while Stochastic looks ready to pull higher.

However, the gap between the moving averages is narrowing to reflect slowing upward momentum and a potential bearish crossover. The pair has also fallen below both indicators, so these might hold as dynamic resistance.

A break below the neckline support around 83.00 could set off a drop that’s the same size as the reversal formation. That’s over 300 pips yo!

A bounce or break might hinge on whether or not risk aversion extends its stay in the financial markets before traders take off for the weekend. Better keep those eyes peeled for reversal or continuation candlesticks!

Market Jumps on Another Fed Hike!