Is that a reversal pattern confirmation I’m seeing on CAD/CHF?

Here’s what I’m watching ahead of Canada’s retail sales release.

Before moving on, ICYMI, yesterday’s watchlist checked out a head and shoulders pattern on AUD/CAD. Be sure to check out if it’s still a valid play!

New Zealand Westpac consumer sentiment index down from 92.1 to 78.7

Japanese PM: Rapid yen weakening is a source of concern

What to Watch: CAD/CHF 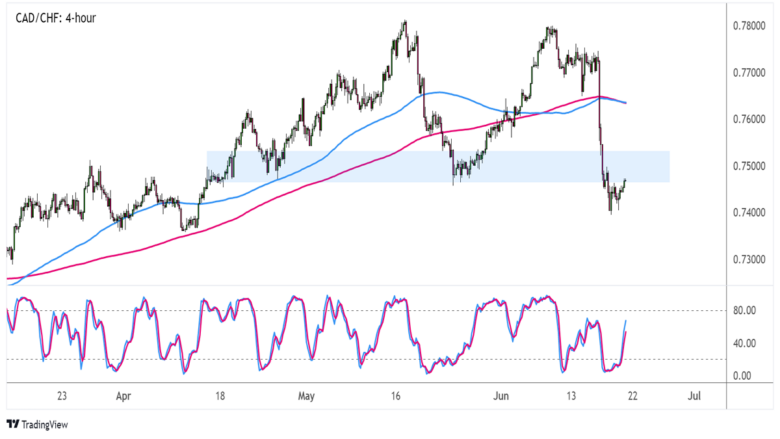 Are my eyes deceiving me or am I seeing a double top breakdown on CAD/CHF?

The pair seems to have closed below the neckline of the reversal pattern around the .7500 major psychological mark, but a pullback is in order.

Stochastic is pointing higher, after all, so buyers might have enough energy to go for a retest of the former support zone. Meanwhile, moving averages are oscillating and have yet to give strong directional clues.

Of course this could all boil down to the outcome of Canada’s retail sales report, which is expected to show mixed results for the headline and core figures.

Headline consumer spending likely slowed from a 2.4% gain in March to a meager 0.5% uptick in April while the core version of the report probably accelerated from a flat figure to a 0.8% increase.

Apart from that, the oil-related Loonie might also take cues from commodity prices and overall market sentiment. The U.S. markets are about to reopen after a holiday, so we’re bound to see more exciting action in the upcoming session.

As for the Swiss franc, the SNB‘s surprise 0.25% interest rate hike last week still seems to be lifting the currency’s spirits. Guess this means they’re no longer hell-bent on keeping the franc weak like they used to!