Ether (ETH/USD) looks like it’s having trouble getting buyers ahead of the Merge!

More importantly, it bounced lower after a retest and strengthened the case for a bearish reversal. 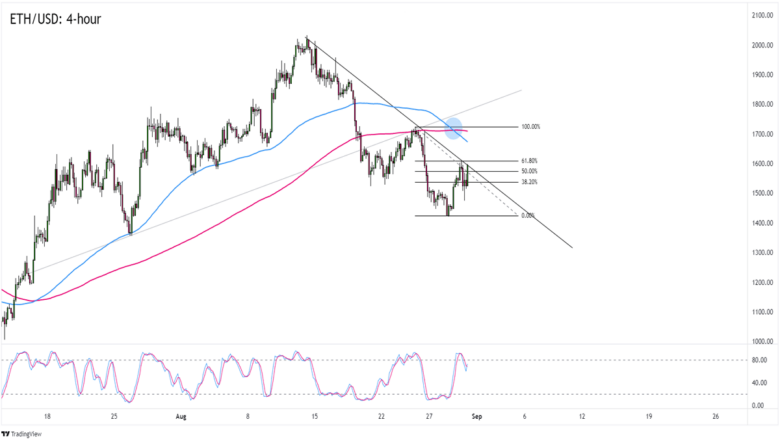 The pair is now trading at the $1,600 psychological level that lines up with last week’s support zone and a trend line resistance that’s been containing ETH bulls since mid-August.

Our dynamic inflection points also point to more selling as the 100 SMA just crossed below the longer-term 200 SMA.

Will ETH/USD extend its current downswing?

It’s possible. Already some investors are hitting pause on their ETH HODLing ahead of the anticipated Merge.

Recall that while the actual Merge will happen sometime between September 10 – 20, the Bellatrix upgrade – which will move the Ethereum chain to the full proof-of-stake (PoS) protocol – will happen on September 6. That’s less than a week from now!

It also doesn’t help that the safe-haven dollar continues to dominate its “riskier” counterparts as the Fed and other major central bankers share their willingness to tolerate “some pain” in favor of controlling inflation.

Unless we see an improvement in risk appetite, ETH/USD could turn lower from its trend line and Fibonacci retracement levels and retest its August lows. Heck, it could even dip below $1,400 before the month ends!

I’m not discounting a return to $1,700 or $2,000, though. Maybe a slight improvement in risk appetite would bring the bulls back to ETH’s yard!

This content is strictly for informational purposes only and does not constitute as investment advice. Trading any financial market involves risk. Please read our Risk Disclosure to make sure you understand the risks involved.

August US NFP: A Return to Normal?

China’s low interest rates are failing to spur lending in the economy – ‘liquidity...