Time for a classic break-and-retest play!

I’m looking at this trend line breakout and potential correction levels on the hourly chart of Brent crude oil.

Do you think bulls will charge again soon? 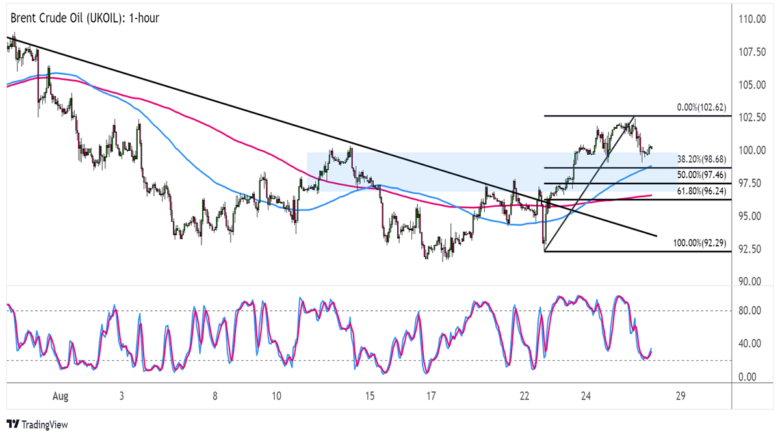 If you’re hoping to catch the crude oil rallies, these pullback levels could be your chance to buy on dips!

The commodity already busted through its descending trend line and double bottom neckline, confirming that an uptrend is in the cards.

The handy-dandy Fib tool shows that the 38.2% to 50% levels span an area of interest or former resistance zone near the broken trend line.

The EU Is Considering a Ceiling on Oil Prices

More buyers might be hanging out around the $97.50-98.75 per barrel area, which might be enough to keep losses in check.

After all, technical indicators are already pointing to a continuation of the climb. The 100 SMA crossed above the 200 SMA to show that buyers have the upper hand while Stochastic is starting to turn higher.

In addition, the 100 SMA dynamic support lines up with the 38.2% Fib to add to its strength as a floor. The 200 SMA is closer to the 61.8% level, which would probably be the line in the sand for a bullish correction.

As it turns out, Saudi Arabia is anticipating a boost in crude oil output from Iran if the nuclear deal pushes through. At the same time, expectations of weaker demand might also leave a supply glut if the cartel fails to adjust production.

To top it off, the latest inventory reports from the API and EIA reflected surprise reductions in stockpiles, bringing more bullish vibes for the commodity.

Just make sure you keep tabs on headlines from the Jackson Hole Symposium since central bankers’ testimonies would likely impact risk sentiment!

This content is strictly for informational purposes only and does not constitute as investment advice. Trading any financial market involves risk. Please read our Risk Disclosure to make sure you understand the risks involved.

The US dollar index is trading flat LeapRate