This article was submitted by Michael Stark, market analyst at Exness.

Action in stock markets has been muted so far this week after various major indices completed their best month since 2020. The focus of traders this week is on the NFP, which might give more hints on the outlook for the USA’s economy in the coming months. This preview of weekly data looks at EURUSD and GBPAUD.

The Fed’s hike of 0.75% last week was widely expected, so didn’t have a very major effect on markets. There was some relief that the most hawkish scenarios for the end of the year, i.e. 4.25-4.5% and above, now seem increasingly unlikely. This week the main events in monetary policy are the meetings of the Reserve Bank of Australia on Tuesday morning and the Bank of England on Thursday. The former is likely to call for a double hike, raising the cash rate to 1.85%, while the outcome of the BoE’s meeting remains uncertain between a one- and two-step hike.

The key regular releases this week are American jobs on Friday afternoon. Canadian employment data are expected at the same time, and traders are also looking ahead to balance of trade from various countries on Wednesday and Thursday. This is quite an active week of data, but for the dollar, gold and American indices there’s a low probability of very large movements ahead of the NFP. 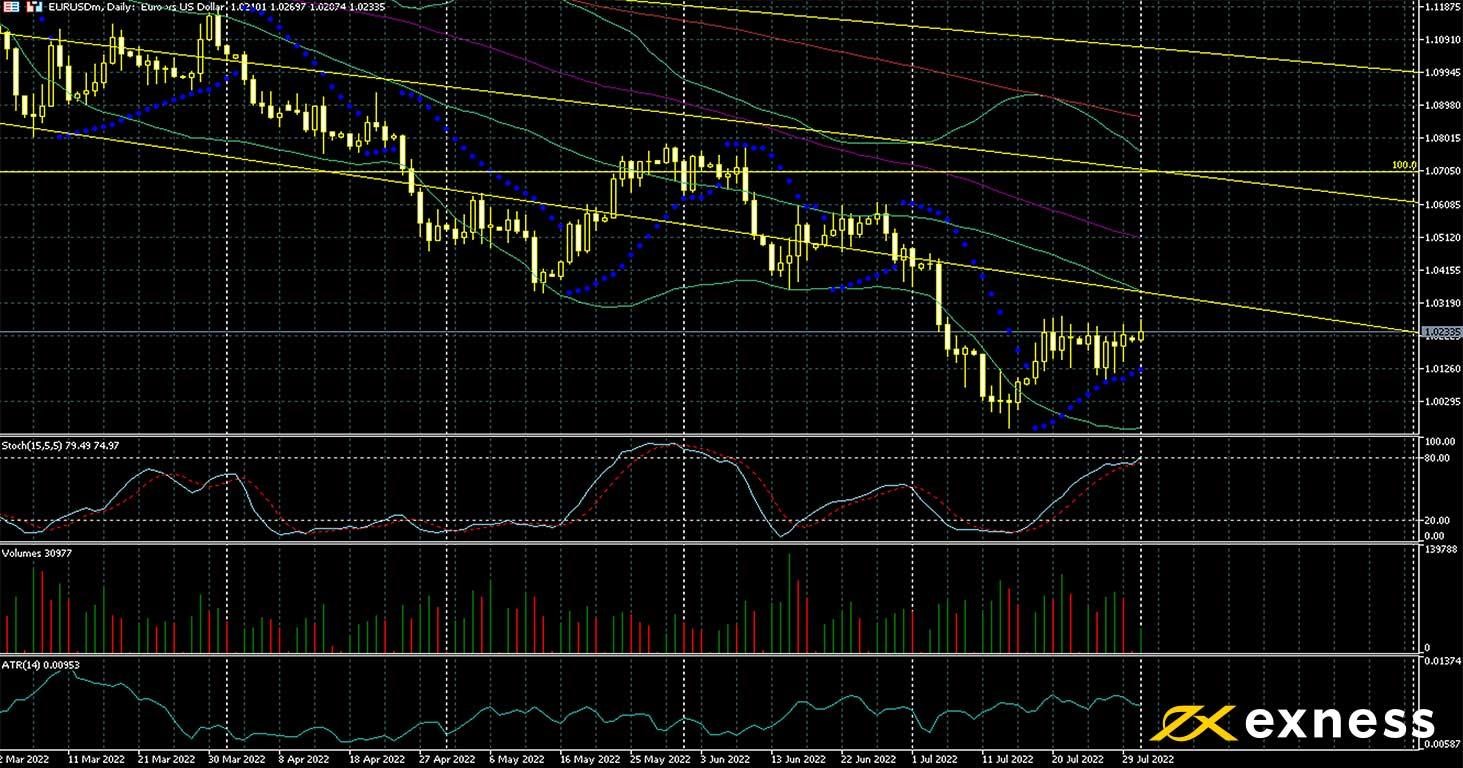 The euro has bounced cautiously from parity against the US dollar in recent weeks as the outlook for monetary policy in the eurozone has become more hawkish. Inflation has been higher than expected and is probably yet to peak for both the EU and the USA, but the difference has been bigger in the eurozone over the last few months. Participants also note last week’s negative advance GDP from the USA for Q2, indicating a technical recession, while in the eurozone the flash releases last week were positive overall.

A sustained bounce seems unlikely in the runup to the NFP, but the chart also suggests some positivity. There was some follow through on the bounce from oversold and stochastic crossover around the middle of last month, with the price now still not quite overbought. Volume has increased compared to Q2’s average. The next main resistance is the confluence of the 50 SMA with the 38.2% area of the weekly Fibonacci fan.

It seems likely that the result of the NFP will be the next key catalyst for euro-dollar. Given the Fed’s comments last week about a strong job market, a rise in unemployment or particularly disappointing NFP would probably drive the euro strongly upward, at least in the short term.

Bold indicates the most important releases for this symbol. 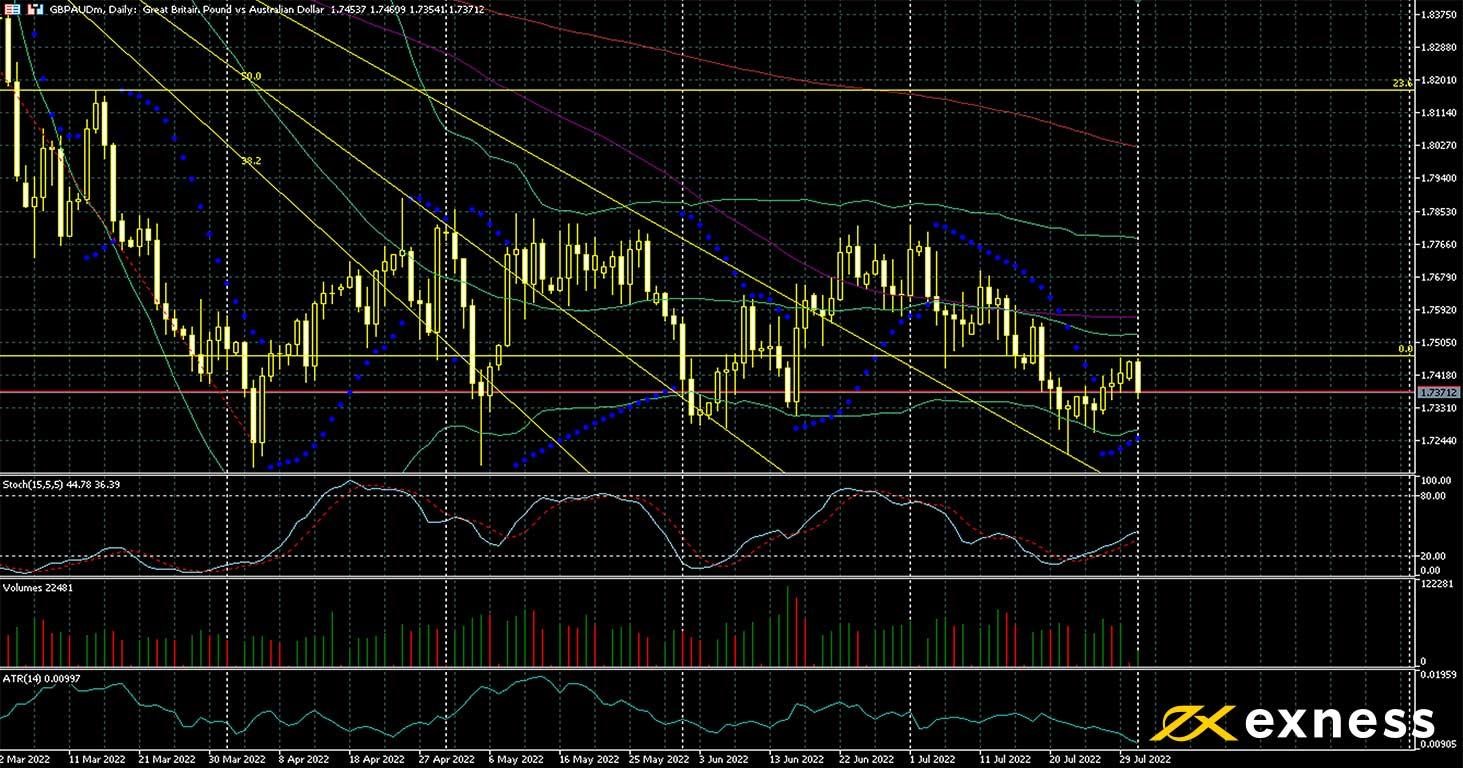 The pound lost ground against the Aussie dollar last month amid political instability in the UK and ongoing uncertainty over the Bank of England’s next move. While the chance of a two-step hike on Thursday by the BoE is now nearly 80%, a hike of the same size by the Reserve Bank of Australia tomorrow in the wee hours GMT seems nearly certain. Although inflation in Australia last month was somewhat lower than expected, the job market there seems to be quite robust, supporting the RBA’s policy of tightening to tackle inflation without serious risk (for now) of triggering a recession.

The main technical reference on the daily chart of GBPAUD remains the 0% weekly Fibonacci retracement area, the low around new year 2021. There have been four failed tests of $1.73 to the downside since the beginning of the second quarter of this year, so this seems like a strong support which would probably hold unless this week’s meetings and data give a major surprise.

$1.77 is an important resistance which would probably resist testing if the pound makes gains in the next few weeks, but the main short-term target for those sure of a double hike by the BoE might be the value area between the 100 and 200 SMAs. That both central banks are meeting within three days makes higher volatility for this symbol likely as participants use the new information to try to price in upcoming rates over the next few months.

Bold indicates the most important releases for this symbol.

Disclaimer: opinions are personal to the author and do not reflect the opinions of Exness or LeapRate.

1 of the Top FOREX Prop Firms: The Funded Trader