U.S. payrolls added 372k jobs in June. That was similar to the pace in the prior two months and brought the overall shortfall in employment from pre-pandemic to just over half a million. Employment continued to grow in high-contact service industries including leisure and hospitality (+67k), but was also higher in professional and business services (+74k). The unemployment rate held at 3.6% for a fourth consecutive month but the labour force participation rate at 62.2% remained over a full percent below levels immediately pre-pandemic, thanks to a slower comeback of workers aged 55 and over. Heightened demand for workers means businesses have to compete with higher wages to attract and retain talent from a shrinking labour force, adding to pressure that’s already been accelerating over the past months.

On a year on year basis average hourly earnings grew 5.1% in June, a tick lower than the 5.3% in May but still elevated comparing to rates pre-pandemic (annual wage growth was 3.3% in 2019.) The increase was also particularly elevated in leisure and hospitality (+9.2%). Up to May, growth in wages relative to pre-pandemic was still outpacing the rise in consumer prices, but just slightly. It would not take a large upside surprise in future inflation readings to close that gap. Indeed, rising inflation is increasingly biting into consumers’ spending power, pushing their confidence lower and inflation expectations higher. There is still substantial momentum in labour markets through this summer, facilitated by rebound in close contact service sectors. But with the Fed hiking rates aggressively in the near-term, we expect labour market conditions to start softening later this year, and the unemployment rate to rise more significantly in 2023. 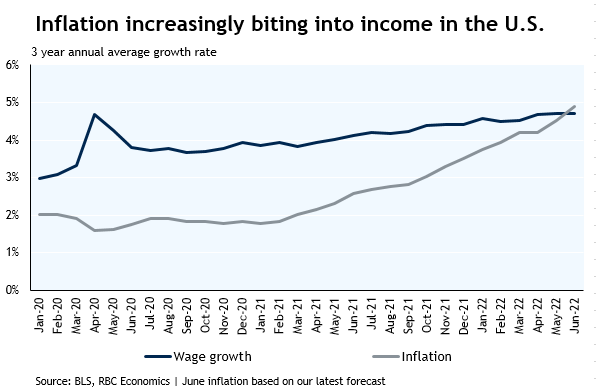 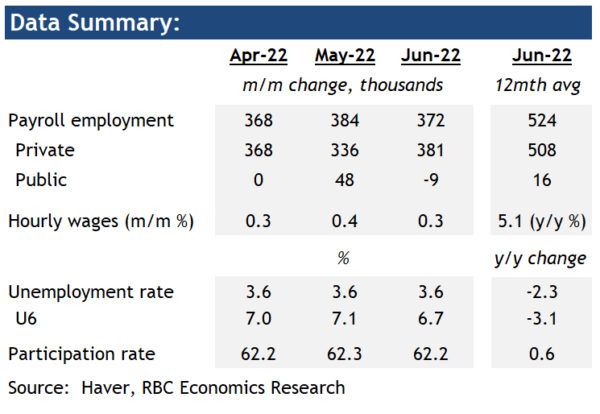 Yes, Looking At Your Worst Trades Can Help You Become a Better Trader

US Dollar Remains Upbeat Amid Recession