Canadian GDP likely declined in May – in line with the 0.2% drop in Statistics Canada’s preliminary estimate a month ago. We do not expect another drop in June. Auto production bounced back after another round of factory shutdowns in May. Activity in the oil & gas sector has increased on higher global energy prices. And economy-wide hours worked jumped by 1.3% after declining in each of April and May.

There is still substantial momentum in labour markets with demand for staff outstripping the supply of available unemployed workers. And near-term momentum in consumer spending still looks strong with spending on travel and hospitality services recovering from the pandemic. But the pace of growth is clearly slowing as the economy bumps up against long-run production capacity limits, and housing markets have already shifted substantially into reverse. Home resales are down 27% since March and prices starting to decline.

The U.S. has hit capacity constraints earlier than Canada with GDP already declining outright in Q1 of this year and our own tracking calls for little change in next week’s estimate for Q2. Labour market data has been stronger – hours worked rose almost 3% (annualized rate) in Q2. And industrial production jumped over 6%. But wages have continued to surge as acute labour shortages intensify, feeding further domestic price pressures. Against that backdrop, the U.S. Federal Reserve is more focused on cooling demand to address inflation than growth risks. We look for the Fed to hike the fed funds target range by another 75 basis points (to 2.25% to 2.50%) next week. 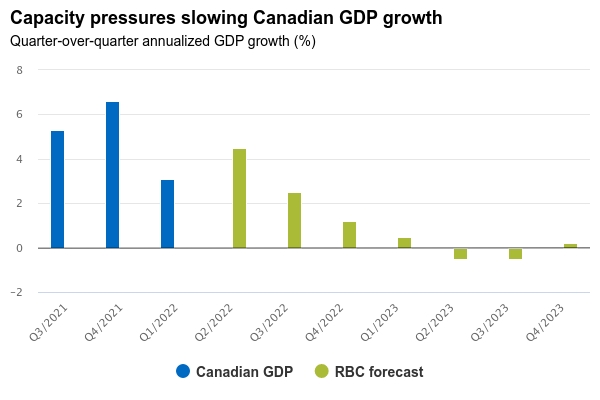 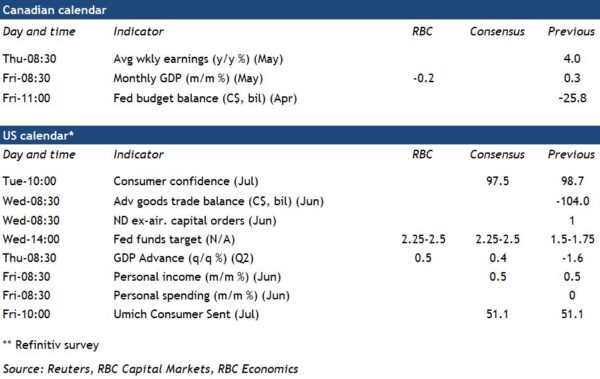 U.S. Dollar hit a high while the Yuan and the Yen plummeted

GBP/USD Price Pauses Upside by 1.16 Ahead of US Services ISM Data