EURJPY paused its short-term bullish sequence near a two-week high of 140.78 and below the 20-day simple moving average (SMA) on Monday as the broken support trendline from March came to block the way higher.

The technical signals reflect a weak bullish bias at the moment. The RSI has barely risen above its 50 neutral mark, the MACD is trying to deviate above its red signal line in the negative region, while the Stochastics are entering the overbought area above 80.

Hence, given the above encouraging signs, the pair is expected to keep pressuring the 140.00 – 141.00 region in the short term. A successful penetration of that bar could initially stall around the 142.00 psychological mark before stretching towards the crucial ceiling of 144.24. Beyond that, the rally could face another acceleration towards the constraining zone of 147.20 – 148.00, last examined during the end of 2014.

Summarizing, the short-term risk for EURJPY is softly tilted to the upside, with buyers waiting for a clear spike above the 140.00 – 141.00 zone to drive the market higher. 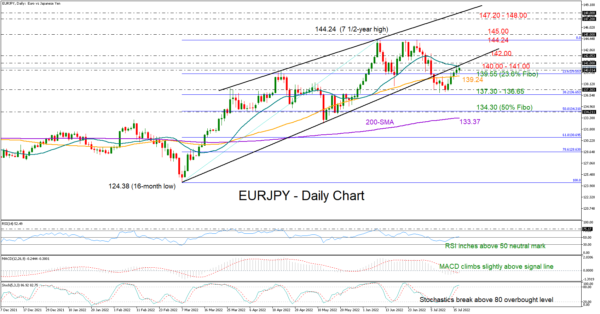 Weekly Economic & Financial Commentary: What Shall We Do Now?

An Important Week for Europeans